WHAT ARE THE PEOPLE OF NEW ZEALAND SMOKING ??

New Zealand is under attack…, but not from radical gunman…, but from Hillary Clinton and her band of EVIL CRONIES + your own DAMN PRIME MINISTER!!

Read the “latest” from:  WHAT DOES IT MEAN! 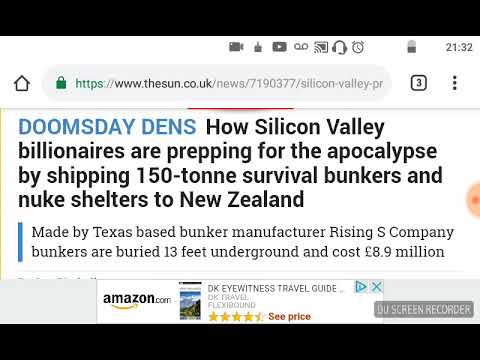 Do to “normal” people in NZ realize that the men and women who want to NUKE the entire world – are planning on coming there (and living in Bunkers) just after they PUSH THE BUTTON??

Good luck with that…., Clinton and her Cronies are pure, pure EVIL!

We here in America know just how bad she really is – SATAN is literally less dangerous than this WITCH!

Hope you have fun having her and her followers – – – IN YOUR COUNTRY!! 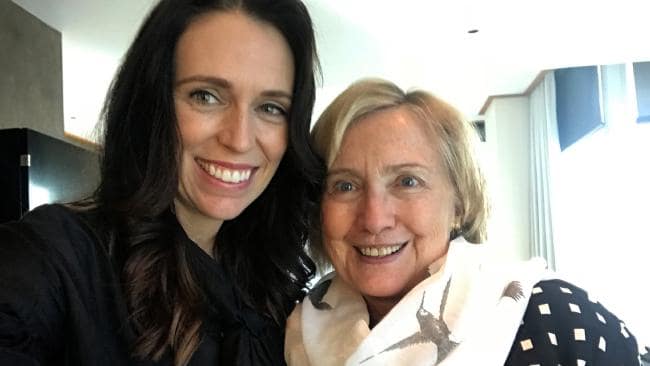 From What Does it Mean:

Giving a chilling new meaning as to why former First Daughter Chelsea Clinton was confronted and blamed for the New Zealand massacre whose toll has now risen to 50 dead and 50 wounded, is a grimly worded Foreign Intelligence Service (SVR) report circulating in the Kremlin today confirming as true the leaked documents showing the European Union is planning for the military overthrow of British Prime Minister Theresa May—a measure that may be needed as British spy agency MI6 continues its war against President Donald Trump to keep him from releasing the classified documents proving the British government’s complicity in the coup attempt launched against him—a coup attempt led by Hillary Clinton—and whose 2016 presidential campaign chairman John Podesta traveled this past week to New Zealand to heap praise on its “superstar”  socialist leader Prime Minister Jacinda Ardern—and whom, also, in the hours before this massacre began, launched a withering attack against Trumpsaying he is “completely unfit and unqualified to be President of the United States”

According to this report, one of the central global spying organizations involved in the coup plot against President Trump is Five Eyes (FVEY)—the anglophone (English speaking) intelligence alliance comprising Australia, Canada, New Zealand, the United Kingdom and the United States—all of whom evade their nations’ privacy laws by spying on each other’s citizens, and then giving it to each other.

Upon taking power in early 2017, this report continues, President Trump began crippling Five Eyes for its being complicit in the coup attempt against him—a move more than justified when later that year, in October-2017, Jacinda Ardern took power as the Prime Minister of New Zealand—that, in turn, allowed this former leader of the International Union of Socialist Youth (IUSY) to have complete control over this nation’s Five Eyes spying operations—a position she was groomed for after Hillary Clinton “took note” of Ardern while she was attending university in Arizona—then moved by Clinton to New York City so Ardern could join workers rights and poverty movements—that afterwards saw Clinton placingArdern into the government of British Prime Minister Tony Blair—the culmination of which saw the radical socialist Arden being swept into power in New Zealand on a wave of what is now known as “Jacindamania”.

Taken from Q-posts only Today:

WHY WAS JOHN PODESTA IN NEW ZEALAND (CLINTON CRONY) 5 DAYS BEFORE THE SHOOTING?? 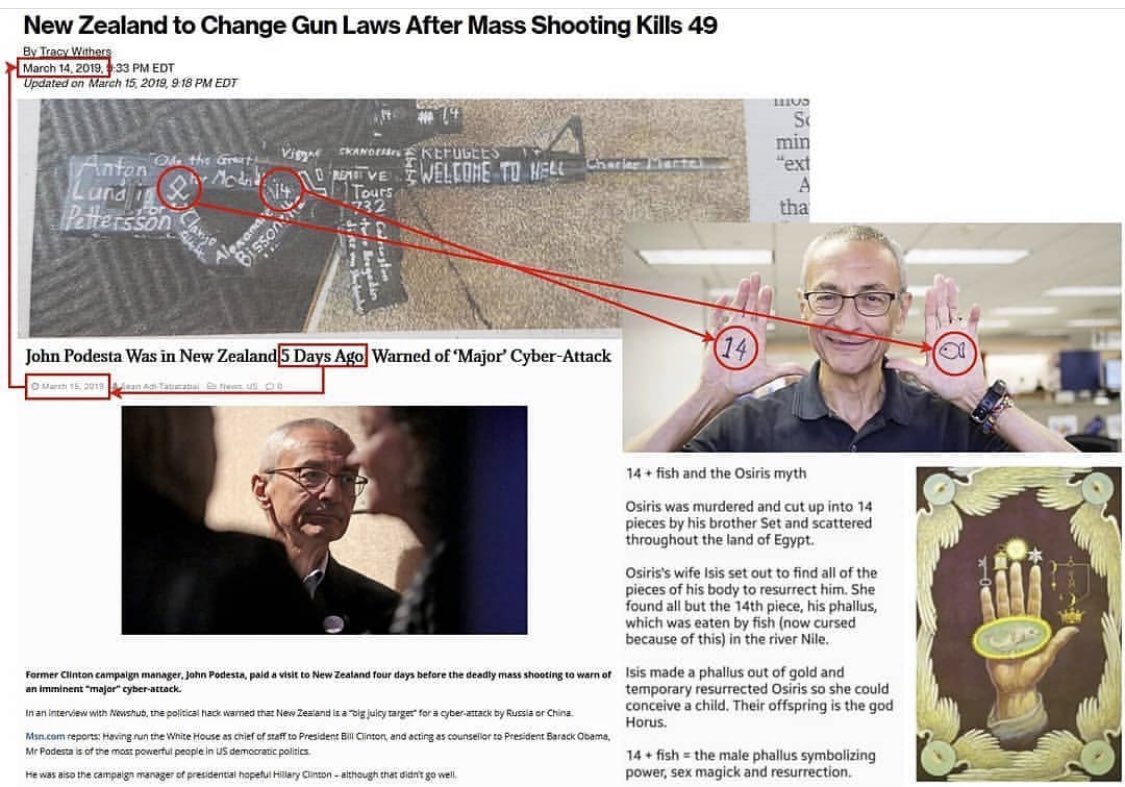 And WHY (of all people) did New Zealanders “elect” Ardern as PRIME MINISTER – given who she is associated with???

DO YOU PEOPLE WANT TO HAVE HORRIBLE THINGS HAPPENING IN YOUR COUNTRY JUST AS IS HAPPENING HERE IN AMERICA??

As to why Hillary Clinton groomed socialist leader Jacinda Ardern to take power in New Zealand, this report explains, SVR intelligence analysts had determined was to create for herself a sanctuary to flee to should her massive crimes be exposed—a determination confirmed as being true by Clinton herself last May-2018 when she quietly traveled to New Zealand to meet with Prime Minister Ardern and admitted she thought of fleeing there immediately after her shocking election loss to President Trump—and where she would be joined by some of the most powerful high tech giant leaders from Silicon Valley who, also, are preparing to flee to New Zealand.

In knowing that the Five Eyes spying operations in New Zealand were under the firm and total control of global socialist leaders Hillary Clintonand Prime Minister Ardern, this report details, SVR surveillance of this organization’s activities was placed to the highest level possible—a surveillance which began detecting an astronomical rise of encrypted communications being sent and received this February-2019 just prior to President Trump’s visit to Hanoi-Vietnam to meet with North Korean leader Kim Jong-Un.

Most concerning to the SVR about the Five Eyes messages being sent and received from New Zealand, though, this report notes, were their being centered on the European Union nation of Spain—where shortly before President Trump landed in Hanoi, the North Korean Embassy was assaulted in a daring daylight raid on 22 February by a team of commandos Spanish media have linked to the CIA—but that the CIA blamed on a secretive dissident organization committed to overthrowing the Kim dynasty named the Cheollima Civil Defense—and whose catastrophic result of led to Trump and Kim breaking off their talks—and shortly thereafter, saw North Korean Vice Foreign Minister Choe Son Hui declaring” “I want to make it clear that the gangster-like stand of the U.S. will eventually put the situation in danger”. 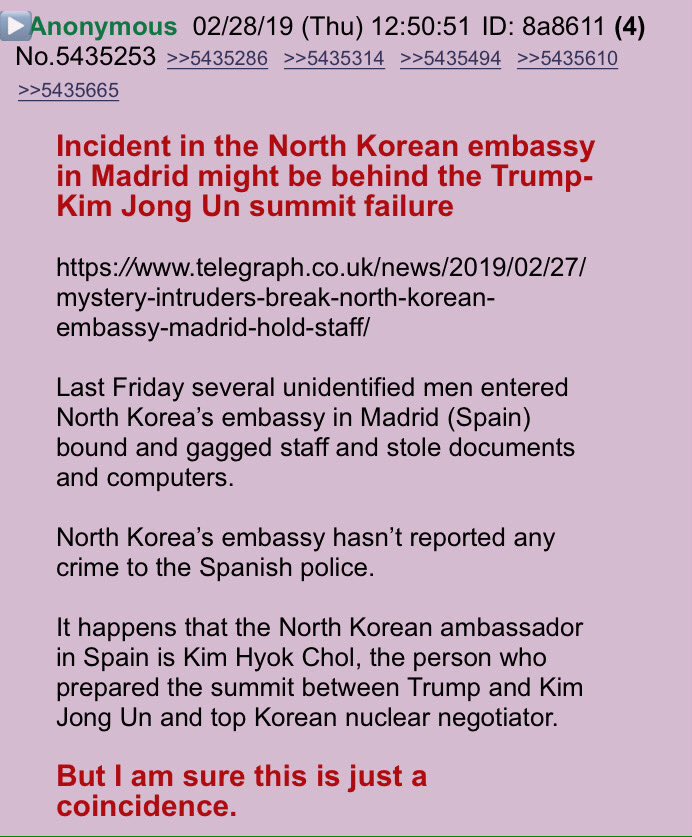 Most alarmingly to be noted about the secretive Cheollima Civil Defense organization (aka Free Joseon) that the CIA has blamed for raiding the North Korean Embassy in Spain, this report continues, is that, in fact, it is a Chinese intelligence operation to protect Kim Han-sol—a legitimate heir to the Kim dynasty, and whom China intends to install as the leader of North Korea should Kim Jong-Un ever reach an agreement with President Trump that would allow US military forces to even come close to the Chinese border.

In fear of this Chinese plot to overthrow and replace him with Kim Han-sol, this report notes, North Korean leader Kim Jong-Un was granted personal protection by President Putin—who surrounded Kim Jong-Un with some of Russia’s most feared and experienced intelligence operatives—one of whose duties is to keep track of known and/or suspected Cheollima Civil Defense operatives entering North Korea—and who became increasingly concerned over a suspected to be British MI6 operative who was making numerous trips between China’s main ally Pakistan and North Korea—whom the world knows today as Brenton Tarrant—the Australian citizen said to be the sole perpetrator of the New Zealand Massacre he carried out after he had received permission from the “re-born Knights Templar” in London to conduct—and in whose “The Great Replacement” manifesto, declared that conservatism is corporatism in disguise, and he wants no part of it, with his further, and unmistakably stating: “The nation with the closest political and social values to my own is the People’s Republic of China”.

With the twin events of the North Korean Embassy commando raid scuttling any peace agreement from being reached between President Trumpand Kim Jong-Un, and the New Zealand massacre occurring, this report continues, socialist-led Hillary Clinton forces are now using both of them to pummel Trump with—especially because of their being able to use these events to trash the secretive Q-Anon military forces protecting Trump, along with the socialist-led mainstream media now warning that all Trump supporters are now threats—and, of course, they’re able to blame Trumpfor this massacre, too.

To the truest “designed reason” behind the New Zealand massacre, though, this report most gravely concludes, the SVR has determined was a Five Eyes directed intelligence operation conducted for the sole purpose of being able to ascertain how quickly videos, photos, messages, real news reports, etc., of a President Trump assassination can be expunged from existence before they can be seen—and in this particular operation saw Facebook alone extinguishing from existence over 1.5 million videos and messages relating to this massacre in the first 24-hours—an outrageous action supported by the socialist New Zealand Prime Minister who ordered her government to threaten everyone in the world with 10-years imprisonment should they even be found to possess any non-approved information about this massacre—but that hit a major roadblock when New Zealand police forces threatened a United States citizen named Joshua Moon—and who quickly fired back at them as only an outraged American can:

Is this a joke?  I’m not turning over any information about my users.

The person responsible for posting the video and manifesto PDF is myself.

I feel real bad for you guys, you’ve got a quiet nation and now this attack is going to be the first thing people think of for the next 10 years when they hear the name New Zealand, but you can’t do this.

Tell your superiors they’re going to make the entire country and its government look like clowns by trying to censor the Internet.

If anyone turns over to you the information they’re asking for they’re not only cowards, but they’re fucking idiots.

My name is Joshua Moon, I’m a US Citizen living overseas.

My company is contained within a Florida company.  If you need an address to send physical documents to – this works.

If you’re wondering, no.  Kiwi Farms has nothing to do with New Zealand.  Our name is a pointed jab at some of the mushmouthed autistic people we make fun of.

Absolutely nothing about our community is NZ oriented.

And I don’t give a single solitary fuck what section 50 of your faggot law say about sharing your email.

Fuck you and fuck your shithole country.

MY BROTHERS AND SISTERS…